Learn technology from the pros.
We’re excited to offer training to help your employees, students, or research group perform at a higher level. Don’t see a training module that fits your needs? Contact us for details of custom training modules and courses.

Custom classes for your team’s needs 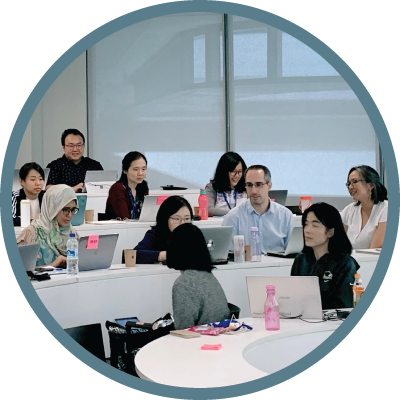 We’re excited to offer training to help your employees, students, or research group perform at a higher level. Don’t see a training module that fits your needs? Contact us for details of custom training modules and courses.

Hear what our learners have to say…

“Great job accommodating everyone with various skill levels, and helping people get caught up.”

“I knew nothing about pytest when I came in, and now I feel like I can at the very least write basic tests for my code.”

“Very clear examples and easy to work through.”

“GREAT mix of instruction lead, then letting people try on their own.”

“Awesome learning experience for someone without a lot of computer science background.”

“Great beginning class for someone like me that does ZERO testing.”

“The material, the instructors, the examples, all were excellent!”

“Success! I never used pytest before and I feel like I could use it now, at least the basic functions.”

Want to learn Python? It’s the hottest and most marketable swiss army knife of data analysis. Our week long workshops get you from on your way with no prior knowledge required! These intensive training sessions are perfect professional development days for your organization or ways to get yourself setup for a new career.

We offer custom hardware solutions for any problem, but this course will enable your learners to design and setup basic data acquisition systems with fundamental explanations of electronics principles and basic micro-controller exposure.

The Arduino is a powerful microcontroller that lets you control real world things based on sensors, signals, and other inputs. In the Arduino Basics course (e-course or in-person) you’ll learn the basics of getting the real world under control.

Hackdays are a great opportunity for your team to work together on projects with our leaders. No matter if you need an injection of domain knowledge or facilitators to help a sprint meet its goals, we’re ready to help!

Hackathons are another great team builder for your company, where we facilitate small 3-5 person teams in a focused 2 day challenge to come up with a prototype and pitch for the next great project at your company. Hackathons have turned into organization wide tools to spur innovation and teamwork amongst your people.

Every developer has heard the saying that “untested software is broken software.” In this 2 day course, we will show your team the best practices for software testing in Python using the pytest framework. Learners will write tests for several existing functions in a provided library, including testing strings, integers, floats, lists, and arrays. We will also use the pytest-mpl library to test matplotlib plotting functions with image comparison. Topics such as test fixtures, parameterization, and test coverage will also be demonstrated. Finally, learners will implement new functionality in the example library and employ test-driven-development practices. This course is targeted at anyone writing code for their own scientific use or for a scientific library and wants to learn effective ways to test that code. Learners are expected to have a grasp on the Python language features, be able to write functions, be able to create and run python scripts, and be comfortable with the command line.

Expensive? Not compared to the money and time your group can save with the skills learned during the course. All courses are priced based on the number of learners, location, and desired duration. Discounts are available for educational institutions!

This website uses cookies to improve your experience while you navigate through the website. Out of these, the cookies that are categorized as necessary are stored on your browser as they are essential for the working of basic functionalities of the website. We also use third-party cookies that help us analyze and understand how you use this website. These cookies will be stored in your browser only with your consent. You also have the option to opt-out of these cookies. But opting out of some of these cookies may affect your browsing experience.
Necessary Always Enabled

Any cookies that may not be particularly necessary for the website to function and is used specifically to collect user personal data via analytics, ads, other embedded contents are termed as non-necessary cookies. It is mandatory to procure user consent prior to running these cookies on your website.